Young patients with chronic lymphocytic leukemia (CLL) can enjoy long remissions on the drug ibrutinib, but must stay on it indefinitely to keep the cancer in remission. A new study by Dana-Farber Cancer Institute researchers suggests that a 2.5-year regimen involving ibrutinib and chemoimmunotherapy can provide deep, and lasting remissions of the disease.

The findings, to be presented at the 63rd American Society of Hematology (ASH) Annual Meeting, update the early results of this study that were published in 2019 study of the regimen in 85 patients with previously untreated CLL. Nearly all the patients were in remission at the 16.5-month mark; the updated data confirm those benefits to be continuing now at a median of 40.3 months.

“Patients with lower-risk CLL, which is marked by mutated IGHV genes, can gain long remissions from a six-month regimen known as FCR – for the chemotherapy drugs fludarabine and cyclophosphamide and the antibody therapy rituximab,” said Dana-Farber’s Matthew Davids, MD, MMSc, who will be presenting the study findings at ASH. Patients who have higher-risk CLL, without IGHV mutation, typically don’t receive the same durable benefit from FCR. They can do very well on ibrutinib, but need to continue it as a lifelong therapy, which particularly younger patients can be challenging given ongoing risks and side effects of the drug.

“Our study examined whether a time-limited course of ibrutinib given in combination with FCR can provide lasting remissions for patients with CLL regardless of whether they have the IGHV-mutated or -unmutated subtype.” 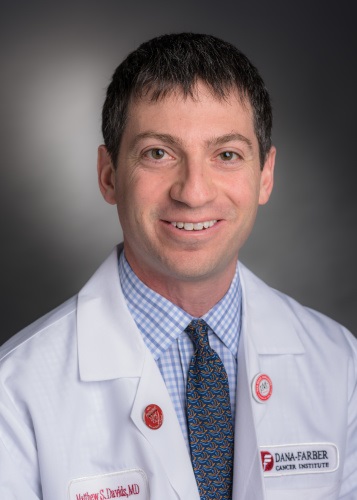 The study enrolled 85 patients age 65 or younger with CLL. Forty-six of them had the more aggressive, unmutated IGHV subtype. Patients were treated with ibrutinib – a targeted drug that blocks an enzyme used by CLL cells to survive – for seven days followed by a combination of ibrutinib and FCR for up to 6 months.  Patients then continued to receive ibrutinib alone for 2 additional years, and those who had no detectable leukemia cells in their bone marrow after the two years discontinued the therapy.

The new study found 99% of the patients to be alive with a median follow-up of 40.3 months, and 97% alive with no worsening of their disease.  Those figures are essentially unchanged from the early analysis of the study, which had a follow-up of 16.5 months.

The few patients whose disease did recur after the 2.5-year mark responded well to the resumption of ibrutinib therapy.

The side effects of the combination therapy were largely manageable and were consistent with those associated with ibrutinib and FCR individually.

“We’re very encouraged about the potential of this therapy to generate long-term remissions in a broad population of younger patients with CLL,” Davids remarked. “For young patients, in particular, who, hopefully, have decades of life ahead of them, the prospect of a time-limited therapy that can have such durable impact without the need for ongoing treatment is very impactful.”

Complete details on Dana-Farber’s activities at ASH are available online at www.dana-farber.org/ash.