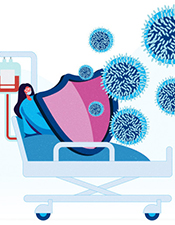 The study, published today, Friday, January 15, in the Journal of Clinical Oncology, found no increase in infections or cancer relapse, suggesting that abatacept’s immune suppression effect may be selective for GVHD.

The findings, in the largest trial to date, could open up bone marrow transplant as an option for many more patients with cancer or blood disorders. Abatacept was particularly beneficial when the donors and recipients weren’t a full tissue-type match, a particular problem for people of color and from ethnic minority populations, for whom it is harder to find a matched donor.

The drug gained FDA Breakthrough Therapy Designation last October. Its developer, Bristol-Myers Squibb, is pursuing formal FDA approval to expand the label of abatacept to include acute GVHD prevention. Severe acute GVHD is fatal in up to half of patients.

In GVHD, T cells from the bone marrow transplant donor “see” the recipient’s healthy cells as foreign, and attack the recipient’s tissues and organs. GVHD risk is lowest when donor and recipient match on 8 of 8 immune factors known as human leukocyte antigens (HLA). If the match is just 7 of 8, the risk of severe, acute GVHD and associated death go up dramatically. It is this 7/8 group that may stand to benefit most from abatacept.

“One of the great tragedies is when a bone marrow transplant succeeds in curing a patient’s leukemia, but the patient dies from complications of the transplant,” says Leslie Kean, MD, PhD, the study’s corresponding author, who directs Pediatric Stem Cell Transplant at Dana-Farber/Boston Children’s Cancer and Blood Disorders Center.

“Abatacept has now been shown, in patients transplanted for multiple diseases, to significantly increase the safety of what have historically been very high-risk transplants: those between donors and recipients that are HLA mismatched.”

The trial enrolled adults and children receiving bone marrow transplants for leukemia, myelodysplastic syndrome, Hodgkin’s lymphoma, and other blood cancers. In one arm, 142 patients and donors matched for 8 of 8 HLA factors were randomized to receive either abatacept or placebo in addition to standard GVHD prevention drugs. In the second arm, 43 patients with a donor match on 7 of 8 factors all received abatacept, and were compared with a historical control group treated with the standard prevention regimen alone.

Both study arms tracked the occurrence of acute, severe GVHD over the first 180 days after transplant, survival free of severe (grade 3 or 4) GVHD at 180 days, and longer-term survival endpoints.

In the 8/8 group, 6.8 percent of patients given abatacept developed severe acute GVHD, versus 14.8 percent of the placebo group. Severe-GVHD-free survival was significantly improved: 93.2 percent in the abatacept group versus 82 percent with placebo.

The benefit of abatacept was most pronounced in the 7/8 arm of the study. Only 2.3 percent of the patients given abatacept developed severe acute GVHD, versus 30.2 percent of the historical control group. Rates of survival free of severe GVHD were 97.7 percent and 58.7 percent, respectively.

“No other approach for GVHD has shown this substantial a difference in these very high-risk patients,” says Kean.

Although the 7/8 group was small and that study arm was not randomized, Kean says it was important to include them. Being able to safely do bone marrow transplants when only 7 of 8 HLA factors are matched would greatly expand the number of patients who could be treated. That includes people of color and most ethnic groups, who are much more likely to need a mismatched transplant than white patients, because of the complexity of their HLA genetics.

“Patients with donors matched on 7 of 8 HLA factors have previously had dismal outcomes,” Kean says. “Many oncologists won’t even consider these donors, which limits or even eliminates these patients’ ability to find the donors they need. Moreover, because of their increased risk, patients who only have 7/8 donors are often excluded from trials of new therapeutics. If we can make these transplants safer, we would have the ability to offer them to many more patients. I see this as the "democratization" of transplant: leveling the playing field.”

Kean and colleagues did a detailed immunologic analysis, repeatedly sampling patients’ blood and doing RNA sequencing to measure the effects of abatacept on the immune response. The findings confirmed that abatacept controlled T cell activation.

While this kind of immune suppression poses a risk of weakening the body’s defenses against the cancer, as well as uncontrolled infections, the study found no increase in either severe infections or relapse in the patients with leukemia.

“We found that the T cells are prevented from attacking the host by causing acute GVHD, but they appear to retain their ability to fight leukemia,” says Kean. “This is impressive, given that these patients received an additional immunosuppressive drug — it’s like having your cake and eating it too.”

The study was funded by the National Institutes of Health (R01-FD004099), Bristol-Myers Squibb, CURE Childhood Cancer, the National Heart, Lung and Blood Institute (K23 HL136900), the National Institute of Child Health and Human Development (K12 HD 72245-4), the American Cancer Society (129701-MRSG-16-153-01-CCE), and the National Center for Advancing Translational Sciences (KL2TR000455). Watkins and Qayed report receiving grants and/or personal fees from Bristol Myers Squibb during the course of the study and are named on pending patents.