In the United States, the 2020-2021 influenza season was notable for its near absence.

According to the Centers for Disease Control (CDC), only 0.2 percent of respiratory specimens evaluated by clinical laboratories during the flu season that ran from September 2020 to May 2021 were positive for influenza virus, despite heavy testing. By comparison, between 26.2 and 30.3 percent of respiratory specimens gathered during the three seasons prior to the pandemic tested positive for influenza.

What this means for the current flu season remains to be seen. However, it is suspected that the natural immunity acquired in the general population during previous influenza seasons may be lost. The concurrent presence of COVID-19 brings another concern because of shared symptoms and the vulnerability of high-risk populations.

Unlike COVID-19, influenza is caused by three types of virus (A, B, and C).

Type A influenza can be divided into subtypes based on the antigenic surface proteins hemagglutinin (subtypes H1-H18) and neuraminidase (subtypes N1-N11). Of these, two, A(H1N1) and A(H3N2) cause seasonal influenza. Since 2009, the designation "/09" (for "pandemic 2009") has been appended to circulating H1N1 viruses to distinguish them from earlier strains.

H1N1/09 is believed to have been the result of reassortment (gene swapping between two or more viral strains, also called antigenic shift) between viruses that originated in pigs. Reassortment is not to be confused with antigenic drift — the random collection of mutations in the HA and NA antigens that occurs over time.

Reassortment of influenza viruses can bring about abrupt, major changes in viral strains leading to pandemic events. In 1968, an avian reassortment virus of the H3N2 subtype resulted in a pandemic that cause a million deaths worldwide. Since this time, an extensive genetic and antigenic evolution has occurred in the H3N2 influenza viruses. By contrast, the genetic and antigenic properties of H1N1/09 have changed little since it first appeared.

Both less common and more stable than influenza type A, influenza type B viruses are subdivided into the lineages Victoria and Yamagata, with the B/Victoria strain dominating in the US. Recent evidence suggests that B/Yamagata may have become extinct during the COVID pandemic following a period of low incidence, muted antigenic diversity, and prolonged use of a well-matched vaccine.

The Challenge of Influenza Vaccination

Each year, the Centers for Disease Control enlists hundreds of laboratories in an extraordinary effort to combat influenza, testing more than a million patient specimens and conducting full genetic sequencing on about 7,000 of these. Eventually, the immune properties of about 2,000 flu viruses will be tested, and up to 50 viruses will be evaluated for possible inclusion in the vaccine. All influenza vaccines available in the US are quadrivalent, containing two influenza A and two influenza B virus antigens.

The innate and the adaptive immune systems interact to provide an effective immune response. Under ideal conditions, vaccines provoke responses from each, but long-term stimulation of the adaptive system is necessary to induce memory cells to counter future infections with the same pathogenic agent.

Existing flu shots use inactivated viruses or recombinant proteins to achieve immunity. Their principal targets are the HA and NA glycoproteins, which have the capacity to elicit broadly reactive neutralizing antibodies.

Another, as yet not fully understood, concern with current influenza vaccines is their waning efficacy with age, or immunosenescence, as a result of the complex deterioration of the host immune system over time.

The Promise of an mRNA Flu Vaccine 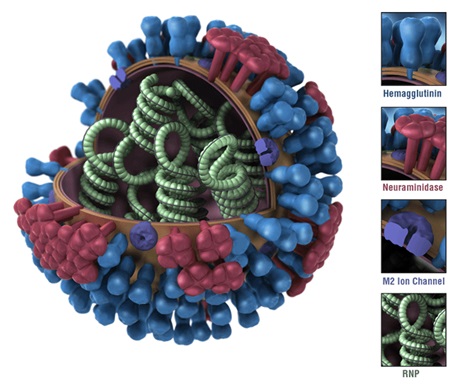 Structure of the influenza virus, with common vaccine targets shown

At the Perelman School of Medicine, NIH-funded pre-clinical studies are ongoing in the laboratory of Norbert Pardi, PhD, to discover a lipid nanoparticle (LNP)-encapsulated, nucleoside-modified messenger RNA (mRNA) vaccine for influenza (hereinafter referred to as mRNA-LNP). The issues with the current influenza vaccines are well known, and seemingly intractable. The hope for the mRNA vaccine to create a vaccine platform capable of providing broadly reactive and long-lasting protection against influenza.

mRNA vaccines for influenza were in clinical trials before the pandemic arrived, and vastly shortened the development process for the successful COVID vaccine that followed. More recently, mRNA-LNP vaccines have emerged as candidates for the first truly universal influenza vaccine. As such, mRNA technology offers a variety of advantages by comparison to the existing flu vaccine platforms.

Manufactured through a synthetic process that is both cell- and egg-free, the mRNA vaccines can encode a readily reproducible target antigen sequence into a plasmid template to exactly replicate flu strains in any given year.

"The flexibility of the mRNA-LNP vaccine platform allows for the incorporation of multiple flu antigen-encoding mRNAs from several flu strains into a single vaccine," Dr. Pardi said in a recent interview. "Such a vaccine will induce a broadly protective response."

Although recombinant vaccines can replicate flu strains with accuracy, they lack the manufacturing expediency and antigenic flexibility of mRNA technology, a benefit that allows for production later in a given season, if need be, should the planned for virus strains drift after identification by the Centers for Disease Control (CDC).

In current research, the potential targets for the mRNA vaccines include the HA and NA glycoproteins, the extracellular domain of the matrix protein 2 ion channel (an element of viral invasion and propagation), and the viral nucleoprotein and matrix protein 1. There are, as well, a number of approaches to mRNA technology, including self-amplifying mRNA, RNActive mRNA, and NP- and M2e-encoding mRNA platforms, as well as the mRNA-LNP vaccine currently being investigated at the Pardi Lab.

To date, mRNA-LNP vaccines have proven effective in animal models against an array of pathogens in preclinical studies, including those responsible for avian influenza virus, human cytomegalovirus, respiratory syncytial virus and HIV.

The Pardi lab recently evaluated an mRNA-LNP vaccine modified to encode wild-type or mutant constructs of neuraminidase (NA), matrix protein 2 (M2), nucleoprotein (NP), or matrix protein 1 (M1) to evaluate the potency and/or safety of each. The study findings demonstrated that modification of antigens within the mRNA-LNP vaccine construct altered the immunogenicity and reactogenicity of the universal influenza virus vaccine targets.

In an earlier investigation of similar design from the Pardi lab, mRNA-LNP vaccines delivering a combination of conserved influenza virus antigens (including HA, NA, M2 and NP) induced strong immune responses with substantial breadth and potency in a murine model. The immunity conferred by the vaccines provided protection from challenge with pandemic H1N1 virus at 500 times the median lethal dose after administration of a single immunization.