(SACRAMENTO) — Shortly after Owen Rinek’s second birthday, the left side of his face became paralyzed. Was it Bell’s palsy, a temporary and treatable condition caused when a nerve becomes inflamed or swollen? Owen was referred to a pediatric neurologist who ordered an MRI at Mercy San Juan Medical Center. 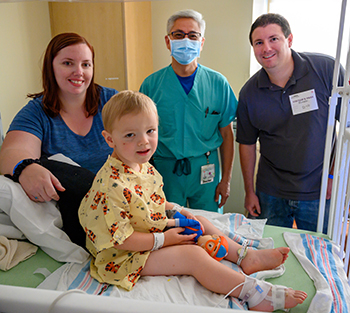 Owen’s family expected a simple MRI appointment. Instead, they got the shocking news that Owen needed to be immediately transported to UC Davis Children’s Hospital via ambulance for monitoring and blood pressure control.

As they worked to find the cause of Owen’s severe high blood pressure (also known as hypertension), doctors learned he had left ventricular hypertrophy – a thickening of the heart chamber that pumps oxygenated blood from the lungs out to the body. Blood tests, ultrasounds, angiograms and MRIs were conducted, as UC Davis doctors searched for more answers. Teams from neurology, cardiology and nephrology met with the family.

“A nephrologist’s role is to ensure blood pressure is gradually decreased, to look for underlying causes and to monitor kidney function and serum electrolytes,” said Maha Haddad, pediatric nephrologist at UC Davis Children’s Hospital. “In Owen’s case, we found a significant stenosis (or narrowing) of the right renal artery, the blood vessel that goes to the left kidney.”

Along with the stenosis, Owen also had two large aneurysms in the artery. The artery had also narrowed at the end of each aneurysm so blood could not exit that area, causing what is called an outpouching of the vessel.

“They told us it was very rare and they had never seen anything like this before in such a young child,” said Bobbie Rinek. “My anxiety was already through the roof from just the routine MRI procedure, but now, it had honestly turned into the worst moment of my life.

“We feared the Bell’s palsy he had was actually a stroke caused by his high blood pressure,” she said. “As a parent, even though there were no symptoms that could have indicated any problem, you inevitably feel guilty and helpless. You wonder what you could have done differently or what you should have noticed.”

Rheumatology and genetics teams were brought in to review Owen’s case. Thankfully, Owen’s other organs showed no sign of damage and doctors could confirm that he did not have a stroke. It was, in fact, Bell’s palsy.

“The UC Davis doctors exhibited incredible teamwork and attention to detail,” said Joe Rinek, Owen’s father. “It was very obvious they were talking to each other and updating each other on Owen’s status as more information was discovered from the various tests and imaging.”

Owen was discharged from the hospital the day before Thanksgiving. Doctors put him on four different blood pressure medications to take every morning and night.

Since then, Owen has had monthly follow-up appointments at UC Davis Health with nephrology, cardiology and rheumatology. Doctors believe that Owen has fibromuscular dysplasia, a condition that causes narrowing and enlargement of the medium-sized arteries in the body. It can reduce blood flow and affect the organ function. It was this condition that caused his renal stenosis and aneurysms and the resulting high blood pressure.

Using a balloon catheter, Ing enlarged the narrowed blood vessel into Owen’s right kidney, significantly improving blood flow into the kidneys. That brought down Owen’s blood pressure to a point where he could eliminate two of his blood pressure medications.

Last month, Owen had another catheterization procedure and Ing further increased the size of Owen’s blood vessel.  At the start of the procedure, Ing saw that one of the two aneurysms had completed resolved. After the procedure, blood flow improved significantly in the vessel exiting the remaining aneurysm.

“My goal is to increase the vessel size along its entire course, not only to improve flow to the right kidney but also to relieve the pressure inside the remaining aneurysm so it can shrink in size like the first one did,” said Ing. “I am sure the aneurysm developed as a result of the blockage in the vessel and blood just backed up causing the vessel to form the aneurysm. But we have to do this gradually and use the appropriate size balloon.”

Owen was discharged from the hospital the next day and is now only on one medication at a lower dose than before.

“We are extremely impressed and grateful for how UC Davis handled, and has continued to handle, Owen’s case. It made us feel so much better to see how all the different doctors and departments worked together and how thorough they were,” said Bobbie Rinek. “We are so grateful to have such an amazing team helping Owen through this difficult time.”