How a Yale Medicine doctor changed a patient's life by providing an explanation for her miscarriages.

After three miscarriages in less than six months, Soley Kaldal was convinced there was something wrong with her body. She and her husband already had two young children, but had hoped to have one more to make their home in Reykjavik, Iceland, complete.

“I went from doctor to doctor to try to figure it out, and they couldn't find anything—but they couldn't rule out that there was something wrong with me, either. Lacking other explanations, I assumed it was me that was the problem. There was a conception every time, meaning the sperm was good, but for some reason my body couldn’t keep the process going,” recalls Kaldal, who is now 38 and a specialist in Arctic safety and security policy for the Icelandic Coast Guard.

This was the spring of 2018, when her son was 7 and her daughter was 2. In between those pregnancies, she had one miscarriage, but otherwise experienced no problems. But now, each loss happened before 10 weeks of pregnancy.

“My need to have another child was all-consuming. When you are in that headspace, it can take over everything,” Kaldal says. “I have this overachieving streak. I never give up. I went into overdrive and decided I would make this right.”

When modern medicine couldn’t find the solution, she turned to alternative treatments: herbs, acupuncture, and homeopathy.

“Alternative medicine practitioners told me I had deficiencies, autoimmune issues, a weak pulse, negative thought patterns, microwave overload from my security-heavy work place, and on and on,” she says. “The message I was left with was that I was a deeply flawed woman. I started to believe it and blame myself. I tried every diet, exercise, meditation, potion, and tincture available and purged all the 'toxic' products from my life, but it didn't work. After months of this ‘detox,’ I got pregnant again and lost that pregnancy. Four losses. It was driving me crazy.”

Kaldal changed focus. She decided to apply for a Fulbright grant and seek an additional degree in international security and diplomacy. “I found a program in California and enjoyed the thought of a year away from the frigid Arctic. But, in order to finish my Fulbright application, I had to apply to at least two American universities,” says Kaldal. “I began looking for a similar master’s program and found Yale’s Jackson Institute for Global Affairs. So, I applied there as well.”

In December 2018, a friend of Kaldal’s, who is a midwife, heard that Yale’s Harvey Kliman, MD, PhD, an expert in recurrent pregnancy loss, would be speaking at the National University Hospital of Iceland. She said she would go and ask him about Kaldal’s case.

“But on the day of, she called me and told me she was sick and couldn’t make it. ‘Maybe you could go. It’s for medical experts but there is nothing barring the public from attending,’” her friend told her.

“Yes, I had a higher chance of miscarriage than the average woman, but there was nothing preventing me from having a healthy pregnancy and baby eventually.”

Because Kaldal’s calendar happened to be open, and the hospital was a short walk from her office, she went. She was the only layperson in the audience, and when Dr. Kliman opened up the floor for questions, Kaldal raised her hand and asked about her situation. "Come and talk to me after the event," Dr. Kliman said.

She hesitantly stood in line as physicians spoke with Dr. Kliman, waiting until they were the only two people left in the auditorium. She told him her story. “He put his hand on my shoulder, looked me straight in the eyes, and said, ‘I will figure this out for you,’” Kaldal says. “I am not a crier, but I burst into tears.”

Dr. Kliman told her to send the tissue from any future losses to his lab. He is the director of Yale’s Reproductive and Placental Research Unit, which studies infertility, pregnancy complications, and placental function.

Meanwhile, Kaldal received a Fulbright grant and was accepted into Yale’s Jackson Institute for Global Affairs to pursue a master’s degree in international security and diplomacy. In April 2019, she became pregnant for the fifth time in a year.

“I said to my husband, ‘If this baby survives, we drop Yale and the idea of further education. If it’s another loss, we’re going to America,’” Kaldal says.

At 10 weeks, she lost the baby. A fifth loss. This time, she sent the tissue to Dr. Kliman. About a week later, Dr. Kliman called. "Soley, I know what's wrong," he said.

“He confirmed that the losses didn’t have anything to do with my health, lifestyle, or uterus. The embryos had genetic abnormalities and never would have survived. He said he could see this from the structure of the placenta,” Kaldal says. “I have never felt such a wave of relief in my life. I could finally stop blaming myself for ‘killing’ pregnancies, and depriving my husband and our children of an addition to our family. It wasn’t me that was broken.”

A miscarriage, also known as early or spontaneous pregnancy loss, is when a fetus dies in the womb before 20 weeks of pregnancy. Sometimes women don’t even know they are pregnant when the loss occurs. For those who do know they are pregnant, an estimated 10 to 15% of pregnancies end in miscarriage, and most happen in the first trimester (up to week 13). One to 5% of miscarriages happen in the second trimester (weeks 13 to 19).

For years, Dr. Kliman has been researching how genetic abnormalities in the placenta affect pregnancy. The most common cause of unexplained miscarriage is an abnormality in the chorionic villi, which are tiny, finger-like projections of placental tissue that contain the same genetic material as the fetus, Dr. Kliman says.

These abnormalities are genetic, Dr. Kliman adds, and can come from the mother or the father. “Eighty-five to 90 percent of miscarriages we have studied were due to a genetic issue, which we could see in the placental tissue,” Dr. Kliman says. “My philosophy is to do no harm. Women often go through an expensive work up for a clotting disorder or are put on an anticoagulant because there is no other explanation. Or they get a surrogate, and that won’t stop the problem.”

The problem, he says, is that women often don’t know why they miscarried, and they blame themselves. “They think there is something wrong with them, that they can’t do this fundamental thing; it ends marriages,” says Dr. Kliman. “This is a national and global problem. Women are so appreciative when I can give them an answer.”

And they don’t know, he adds, because only a small percentage of placental tissue is examined by a pathologist after miscarriage.

“It’s one thing to tell a woman that she didn’t cause it. I show her the scientific evidence of a marker for a genetic abnormality, how it means something developmentally went wrong, and there was nothing she could have done or predicted,” he says.

From Reykjavik to New Haven

For Kaldal, Dr. Kliman’s explanation was exactly what she needed to hear.

“He told me it was like throwing dice and simply a matter of statistics. Yes, I had a higher chance of miscarriage than the average woman, but there was nothing preventing me from having a healthy pregnancy and baby eventually,” she says. “Even though he couldn’t fix me, the diagnosis was so significant because it meant I wasn’t broken. This was just a matter of how my husband and I mix genetically. There are no genetic tests for these problems yet, but this was a definite scientific answer and having that eliminated all the other possible explanations.”

She said she didn’t know how to thank him, but would do so in person when she moved to New Haven.

Kaldal and family arrived in August 2019 and she followed his medical advice to take a break in trying to get pregnant so that she could enjoy her year at Yale.

“It was great advice and I enjoyed my time so much,” Kaldal says. “I took classes with Secretary John Kerry and General Stanley McChrystal to name a few of the amazing giants of global affairs.”

Because of the pandemic, Kaldal had to leave the U.S. sooner than expected so that she could return to frontline emergency planning for the Icelandic government.

“I was simultaneously finishing the last couple of weeks of the spring semester at Yale, and despite the crazy circumstances I managed to get top marks in all courses, graduating with honors,” Kaldal says. “After graduating, I was ready to try getting pregnant again after a more than a yearlong break.”

Kaldal got pregnant within a few months. “I was cautiously optimistic and then I was very nauseous and tired and had to go to the hospital to get some extra fluids put in me,” she says. “They did a scan and told me I was expecting… twins. I think they expected me to freak out, but I was extremely happy. It was a dream of mine to have twins, even though I wouldn’t admit it to anyone.”

But she was also terrified by the idea of losing not just one baby, but two. Her obstetric team, she says, saw her just about every week throughout the pregnancy, which gave her reassurance.

On March 16, 2021, twins, a boy and girl—Jon and Gudrun—arrived healthy, making her family “perfect,” Kaldal says. 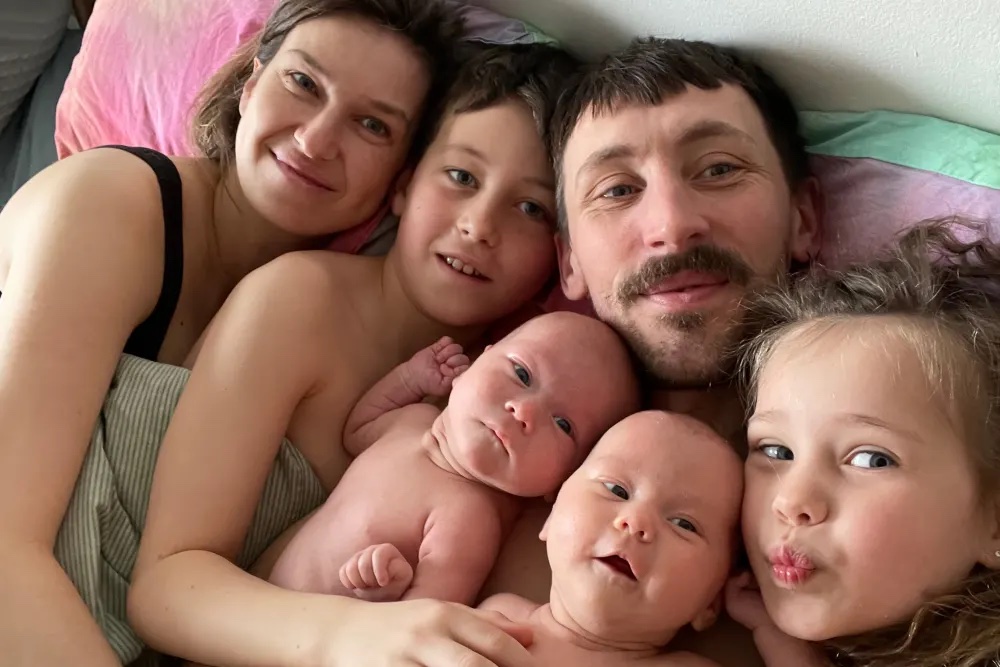 Even though there wasn’t a treatment Dr. Kliman prescribed, the explanation to what was going on is what I needed, Kaldal says.

“I don't think I would ever have had the courage to try for these babies had I not had the brilliant, cutting-edge diagnosis from Dr. Kliman and his team. I would have spent the rest of my life blaming myself for being flawed and kept looking for what was wrong with me,” she says.

“Instead the blame was removed and my dreams came true—all thanks to Dr. Kliman, an amazing scientist, doctor, and innovator, and a deeply compassionate and giving person, who was willing to find an answer to a total stranger's medical mystery at her most vulnerable moment.”