For three years, Abigail Altman was a medical mystery. A stand-out track and cross-country runner, she had become alarmingly pale and lethargic, lost her appetite, and started passing out during races which she sometimes could not remember running in at all. "All these weird medical things were happening, but no one could figure out why. I went to cardiologists and ran on treadmills to monitor my heart. Then, they thought it was anxiety for a long time. I went to an eating disorders clinic because they thought it could be a nutritional deficiency. No one knew what was wrong," says Abigail. It was a long and frustrating period for her parents as well. "We know our child and we knew something serious was going on," says her mother, Christian. "Every time they gave her a diagnosis, we went all in on whatever they said to do–special diets to gain weight, breathing exercises, a therapist for anxiety. It was so frustrating; we were doing all these things and she wasn't getting better. It was the worst three years of our lives."

An abnormal pulse-oximeter reading at a primary care visit finally led to the answer. "The nurse put the thing on my finger three times because she didn't believe it," says Abigail. "My red blood-cells were so low that it basically said zero." She was referred to a hematologist who ordered a renal scan. "They loaded me up on a stretcher right from the doctor's office and took me to the hospital," says Abigail. "They said I had stage five kidney disease, but I didn't really believe them. It seemed so dramatic. I felt totally normal. When they started saying the word 'disease,' I was just in shock." As serious as the news was, her parents' persistence had paid off. "It was a relief to finally have an answer," says Christian. "You know your child better than anyone. You know when something is wrong. We just had to keep pushing all those years until someone figured out what it was."

Abigail's chronic kidney disease (CKD) was caused by an undiagnosed, genetic ureter defect that, over the course of her life, had put increasing strain on her renal system. At the time of diagnosis, she had less than 10% kidney function. "I didn't have any of the regular signs of CKD," says Abigail. "I should've had back pain and urinary tract infections and I shouldn't have been able to be so active. But I didn’t have any of that." 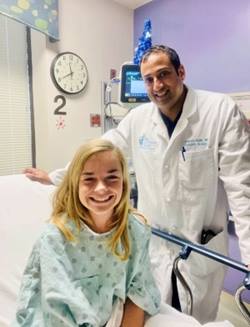 After exploratory surgeries and a blood transfusion, Abigail was transferred to MUSC Shawn Jenkins Children's Hospital where, Shumyle Alam, MD, a pediatric urologist treated her. "She was a really unusual de novo presentation at age 17 – a high-level athlete in renal failure with both kidneys showing massive obstruction," says Alam. "She definitely needed a children's hospital because we use very different protocols for children than adults. We got her into pediatric intensive care and gave her tons of fluids to get her stabilized. Then we came up with a plan to fix her kidneys, even though, in many places, they would've considered her kidneys unfixable."

Alam leads a novel, multi-disciplinary program for managing Congenital Anomalies of the Kidney and Urinary Tract (CAKUT) at MUSC. The program reflects a recent national and international shift in how to best treat patients like Abigail. "A fundamental tenant of our CAKUT program is preservation of renal function, no matter what degree of renal failure you have. If we get even one or two years with the native kidneys without dialysis, it's a success. So, we're not reactionary to the stage of kidney disease. Instead, we focus on what we can do to prolong the time before transplant or dialysis," says Alam.

"Dr. Alam took it step-by-step," says Abigail. "He never threw around the word 'transplant.' He said that was our very last option, and we could do a lot before it came to that. I thought, 'Wow! He's pretty calm for me being in Stage 5!" 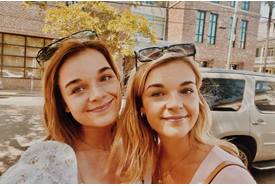 Abigail and her twin sister Grayson.

Although the approach is a radical departure from the typical treatment pathway for patients with severe renal failure, it was even more unusual in Abigail's case because she has a twin sister. "There's a living, perfect-match donor, so everyone instantly focused on getting her to transplant. But I wanted to un-obstruct her kidneys and see how much they could recover, first," says Alam. Although published literature and data suggest this is a futile effort, Alam has decades of experience to the contrary. "People are not statistics. We unblocked one side at-a-time and developed a plan of care to see how much function she could recover. At the same time, she was evaluated for transplant in case we did end up taking that path."

While some of his colleagues agreed with this approach, it was a hard-sell to others and to Abigail. "My parents were happy that we were going to try other things. I, on the other hand, was so tired of being in the hospital and a lot of other doctors were really gung-ho on getting me transplanted. They kept telling me how damaged my kidneys were and how low my chances of survival were. So, it was stuck in my head that, if I wanted to get better, I needed new kidneys. But I knew Dr. Alam really cared about me, so I just decided to do what he said. I drank gallons of water a day and I had so many surgeries. It was a lot, but I'm really glad now."

A little over a year after she was diagnosed with CKD, Stage 5, Abigail's kidney function has improved to Stage 2B. In fact, she no longer qualifies for the transplant list. "I'm only on three medications now, and they never thought I'd get close to the normal range but my numbers keep going down. They're also shocked that I've grown new kidney tissue. They didn't think that would happen, but it has. So that's a good surprise, too," says Abigail.

Her case is an example of how MUSC physicians like Alam and his team are truly changing what's possible. "In most places, standard care is to mitigate, treat, dialyze, and transplant. Here, we want to give patients like Abigail as long as possible before we start down that path. Most people don't realize that a transplant is not a permanent solution. It creates another whole set of problems, like you have to be on immunosuppression therapy which has significant side effects including an elevated risk for several cancers," says Alam. In addition, average graft survival is 5-10 years. So, young patients like Abigail can need several transplants over their lives.

While it is unknown how long her kidneys will continue functioning at this level, Alam and his team consider the CAKUT program strategy a resounding success. "For now, she's living a full life with near-normal, native kidney function that may last many years. We went from a situation where she was facing dialysis and transplant surgery and all the problems that come with that, to being a fully functioning young woman who is attending college and wants to be a child life specialist because of her experience."